Kings and Queens of England 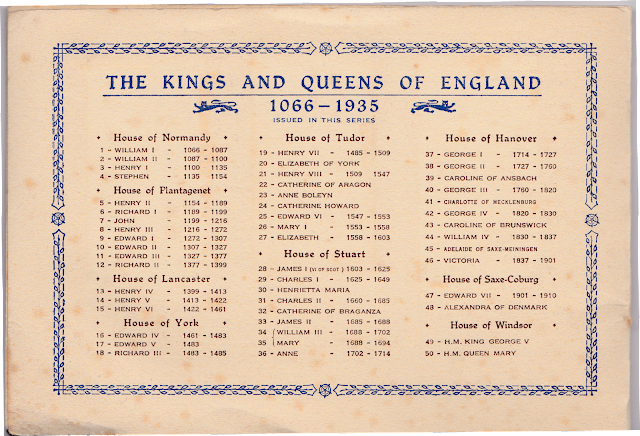 The House of Normandy - This family were the Counts of Rouen, Dukes of Normandy and Kings of England which immediately followed the Norman conquest of England and lasted until the House of Plantagenet came to power in 1154. It included the Norwegian Viking Rollo and his descendants, and from William the Conqueror and his heirs down through 1135. After that it was disputed between William's grandchildren, Matilda, whose husband Geoffrey was the founder of the Angevin Dynasty, and Stephen of the House of Blois.  The last legitimate male line member of the house was actually Henry I of England who died in 1135, but there were many illegitimate lines, notably the de Clare and Fitzwalter families who descended from an illegitimate son of Duke Richard I of Normandy(933-996). 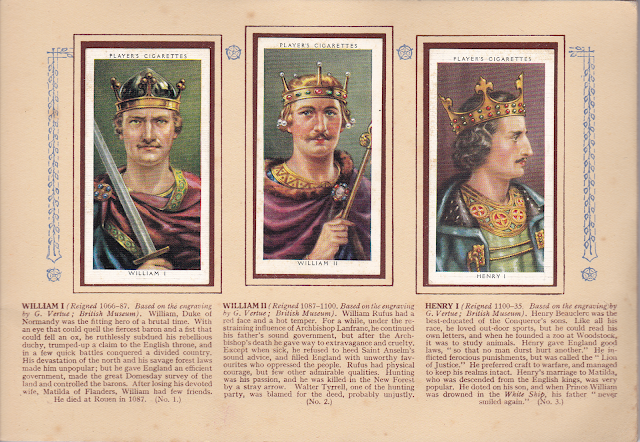 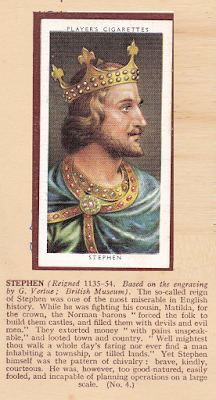 The House of Plantagenet - This English royal house originated from the lands of Anjou in France. The name Plantagenet is used by modern historians to identify four distinct royal houses – the Angevins who were also Counts of Anjou, the main body of the Plantagenets following the loss of Anjou, and the houses of Lancaster and York, the Plantagenets' two cadet branches. The family held the English throne from 1154, with the accession of Henry II, until 1485, when Richard III died. Under the Plantagenets, England was transformed, although this was only partly intentional. The Plantagenet kings were often forced to negotiate compromises such as Magna Carta. These constrained royal power in return for financial and military support. The king was no longer just the most powerful man in the nation, holding the prerogative of judgement, feudal tribute and warfare. He now had defined duties to the realm, underpinned by a sophisticated justice system. A distinct national identity was shaped by conflict with the French, Scots, Welsh and Irish, and the establishment of English as the primary language. 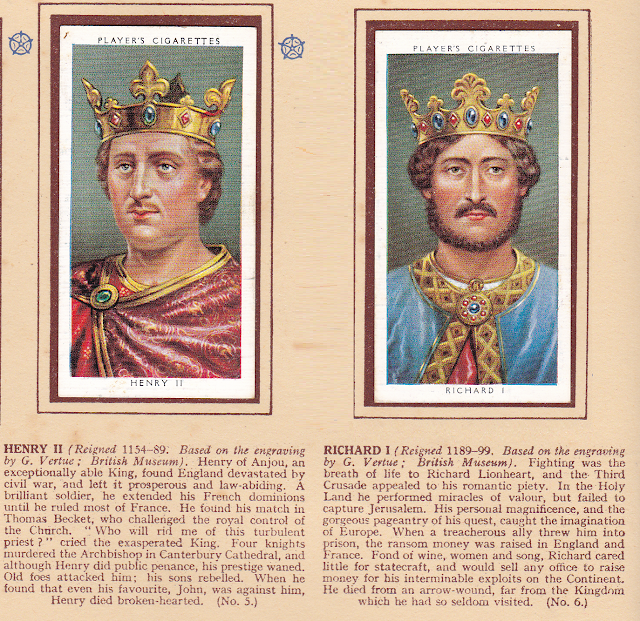 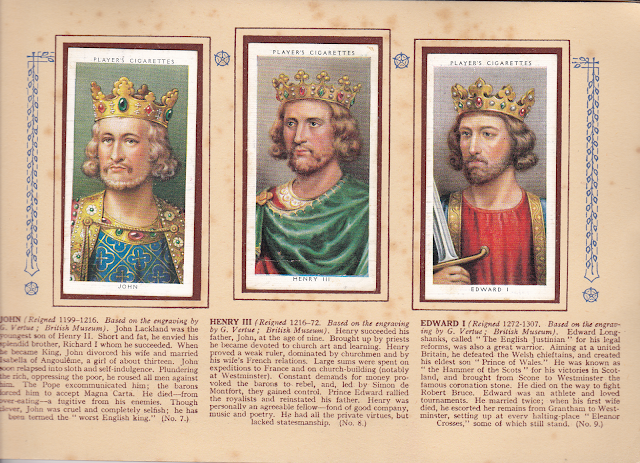 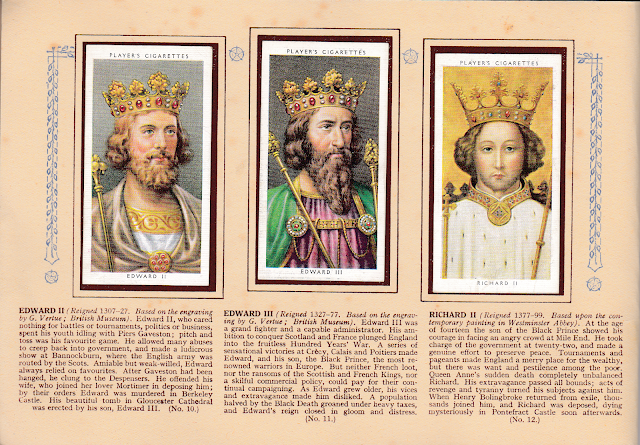 The House of Lancaster- This  was the name  given to the two cadet branches of the royal House of Plantagenet. The first house was created when Henry III of England created the Earldom of Lancaster—from which the house was named—for his second son Edmund Crouchback in 1267. Edmund had already been created Earl of Leicester in 1265 and was granted the lands and privileges of Simon de Montfort, 6th Earl of Leicester, after de Montfort's death and attainder at the end of the Second Barons' War. When Edmund's son Thomas, 2nd Earl of Lancaster, inherited his father-in-law's estates and title of Earl of Lincoln he became at a stroke the most powerful nobleman in England, with lands throughout the kingdom and the ability to raise vast private armies to wield power at national and local levels. This brought him—and Henry, his younger brother—into conflict with their cousin Edward II of England, leading to Thomas's execution. Henry inherited Thomas's titles and he and his son, who was also called Henry, gave loyal service to Edward's son—Edward III of England.

The second house of Lancaster was descended from John of Gaunt, who married the heiress of the first house. Edward III married all his sons to wealthy English heiresses rather than following his predecessors' practice of finding continental political marriages for royal princes. Henry of Grosmont, 1st Duke of Lancaster, had no male heir so Edward married his son John to Henry's heiress daughter and John's third cousin Blanche of Lancaster. This gave John the vast wealth of the House of Lancaster. Their son Henry usurped the throne in 1399, creating one of the factions in the Wars of the Roses. There was an intermittent dynastic struggle between the descendants of Edward III. In these wars, the term Lancastrian became a reference to members of the family and their supporters. The family provided England with three kings: Henry IV, who ruled from 1399 to 1413, Henry V (1413–1422), and Henry VI (1422–1461 and 1470–1471). 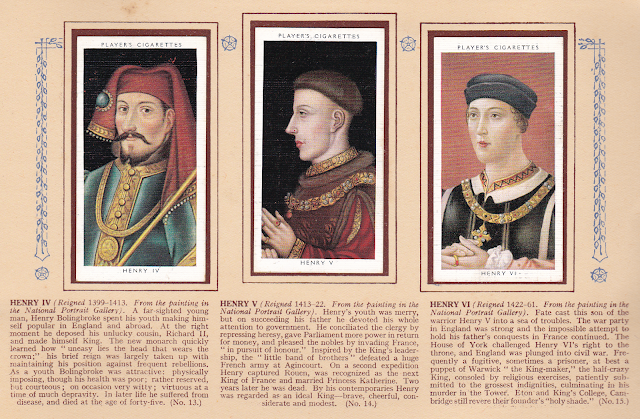 The House of York - This was a cadet branch of the English royal House of Plantagenet. Three of its members became Kings of England in the late 15th century. The House of York was descended in the male line from Edmund of Langley, 1st Duke of York, the fourth surviving son of Edward III, but also represented Edward's senior line, being cognate descendants of Lionel, Duke of Clarence, Edward III's second surviving son. It is based on these descents that they claimed the English crown. Compared with the House of Lancaster, it had a senior claim to the throne of England according to cognate primogeniture but junior claim according to the agnatic primogeniture. The reign of this dynasty ended with the death of Richard III of England in 1485. It became extinct in the male line with the death of Edward Plantagenet, 17th Earl of Warwick in 1499. 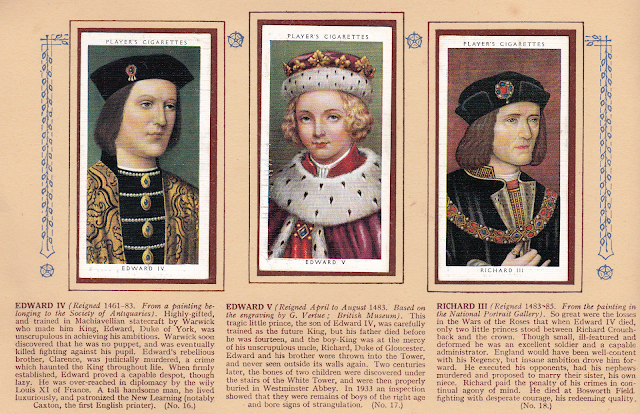 The House of Tudor - This was a royal house of Welsh and English origin, descended in the male line from the Tudors of Penmynydd. Tudor monarchs ruled the Kingdom of England and its realms, including their ancestral Wales and the Lordship of Ireland (later the Kingdom of Ireland) from 1485 until 1603, with five monarchs in that period. The Tudors succeeded the House of Plantagenet as rulers of the Kingdom of England, and were succeeded by the House of Stuart. The first monarch, Henry VII, descended through his mother from a legitimised branch of the English royal House of Lancaster. The Tudor family rose to power in the wake of the Wars of the Roses, which left the House of Lancaster, to which the Tudors were aligned, extinct.

Henry Tudor was able to establish himself as a candidate not only for traditional Lancastrian supporters, but also for the discontented supporters of their rival House of York, and he rose to capture the throne in battle, becoming King Henry VII. His victory was reinforced by his marriage to Elizabeth of York, daughter of King Edward IV, symbolically uniting the former warring factions under a new dynasty. The Tudors extended their power beyond modern England, achieving the full union of England and the Principality of Wales in 1542 (Laws in Wales Acts 1535 and 1542), and successfully asserting English authority over the Kingdom of Ireland. They also maintained the nominal English claim to the Kingdom of France; although none of them made substance of it, Henry VIII fought wars with France trying to reclaim that title. After him, his daughter Mary I lost control of all territory in France permanently with the fall of Calais in 1558.


In total, five Tudor monarchs ruled their domains for just over a century. Henry VIII was the only male-line male heir of Henry VII to live to the age of maturity. Issues around the royal succession (including marriage and the succession rights of women) became major political themes during the Tudor era. The House of Stuart, descended from Henry VIII's sister Margaret, came to power in 1603 when the direct Tudor line failed, as Elizabeth I died without a legitimate heir. 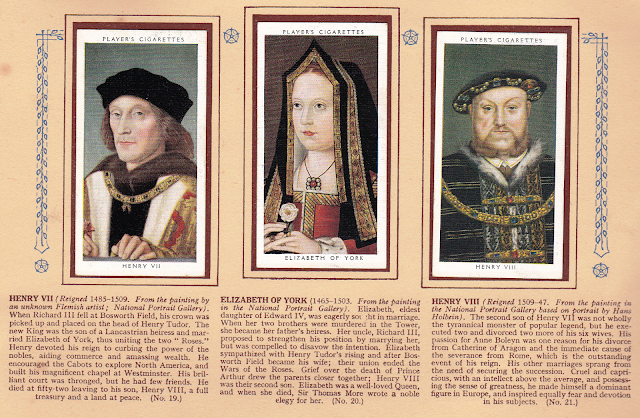 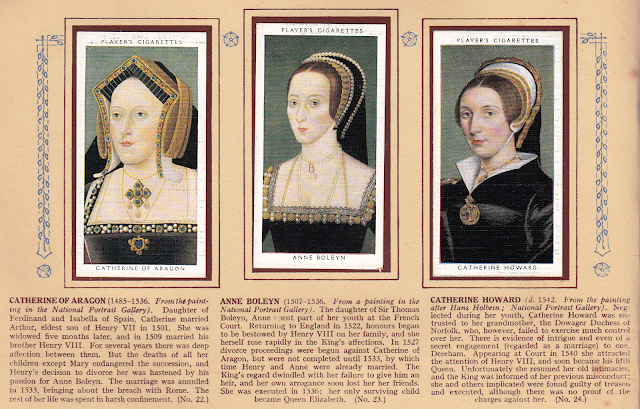 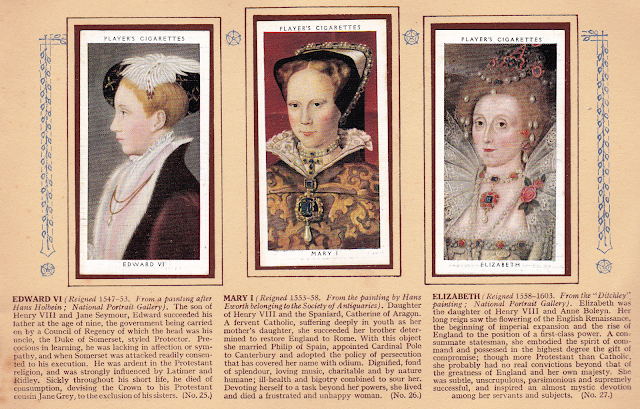 The House of Stuart - This House was  originally name Stewart and, in Gaelic, Stiùbhart was a European royal house that originated in Scotland. The dynasty's patrilineal Breton ancestors had held the office of High Steward of Scotland since the 12th century, after arriving by way of Norman England. The royal Stewart line was founded by Robert II, and they were Kings and Queens of Scots from the late 14th century until the union with England in 1707. Mary I, Queen of Scots was brought up in France, where she adopted the French spelling of the name, Stuart. Her son, James VI of Scotland, inherited the thrones of England and Ireland upon the death of Elizabeth I in 1603. Except for the period of the Commonwealth, 1649–1660, the Stuarts were monarchs of the British Isles and its growing empire, until the death of Queen Anne in 1714.

In total, nine Stewart/Stuart monarchs ruled Scotland alone from 1371 until 1603. James VI of Scotland then inherited the realms of Elizabeth I of England, becoming James I of England and Ireland in the Union of the Crowns. Following the Glorious Revolution in 1688, two Stuart queens ruled the isles: Mary II and Anne. Both were the Protestant daughters of James VII and II by his first wife. Their father had converted to Catholicism and his new wife gave birth to a son in 1688, who would be brought up a Roman Catholic and would precede his half-sisters; so James was deposed by Parliament in 1689, in favour of his daughters. But neither had any children who survived to adulthood, so under the terms of the Act of Settlement 1701 and the Act of Security 1704, the crown passed to the House of Hanover on the death of Queen Anne in 1714.

During the reign of the Stuarts, Scotland developed from a relatively poor and feudal country into a prosperous, modern and centralised state.[clarification needed] They ruled during a time in European history of transition from the Middle Ages, through the Renaissance, to the midpoint of the Early modern period. Monarchs such as James IV were known for sponsoring exponents of the Northern Renaissance such as the poet Robert Henryson, and others. After the Stuarts reigned over all of Great Britain, the arts and sciences continued to develop; William Shakespeare wrote many of his best known plays during the Jacobean era, while institutions such as the Royal Society and Royal Mail were established during the reign of Charles II. 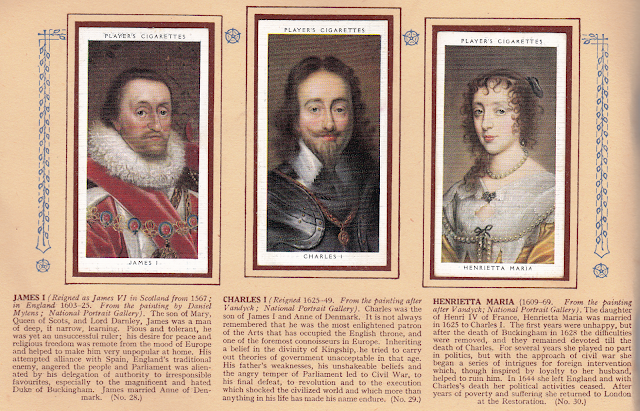 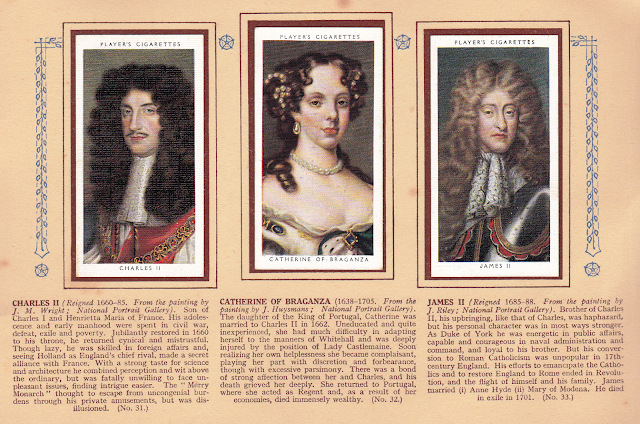 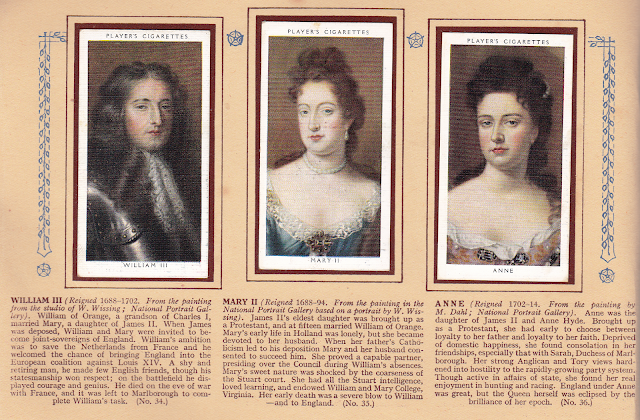 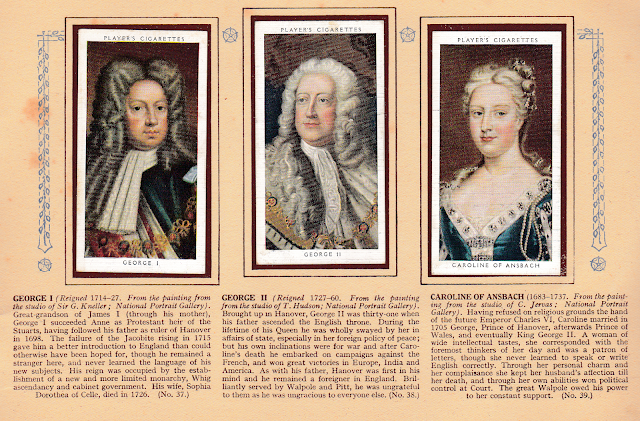 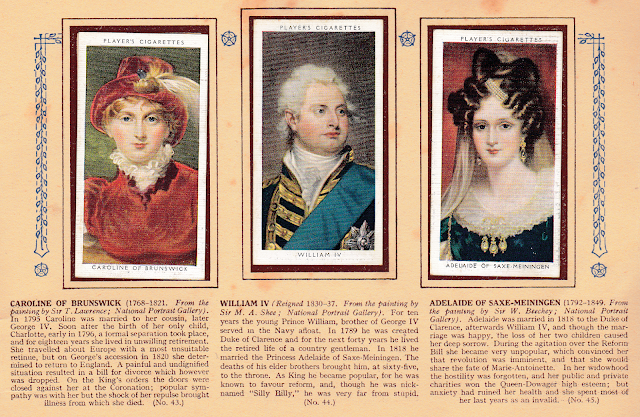 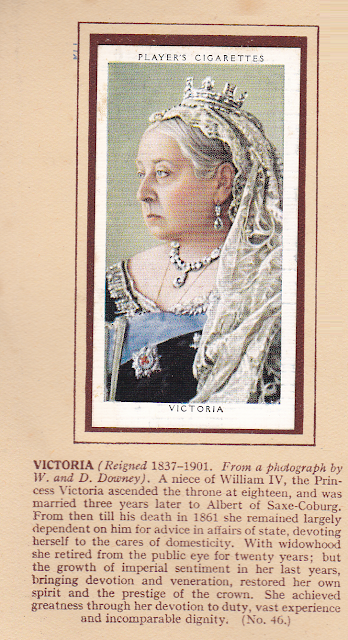 House of Saxe-Coburg and Gotha - This House is a German dynasty, the line of the Saxon House of Wettin that ruled the Ernestine duchies including the duchy of Saxe-Coburg and Gotha.  Founded by Ernest Anton, the sixth duke of Saxe-Coburg-Saalfeld, it is the royal house of several European monarchies, and branches currently reign in Belgium through the descendants of Leopold I, and in the United Kingdom and the other Commonwealth realms through the descendants of Prince Albert. Due to anti-German sentiment in the United Kingdom during World War I, George V changed the name of his branch from Saxe-Coburg and Gotha to Windsor in 1917. The same happened in 1920 in Belgium, where it was changed to "der Belgen" (Dutch) or "des Belges" (French), meaning "of the Belgians". 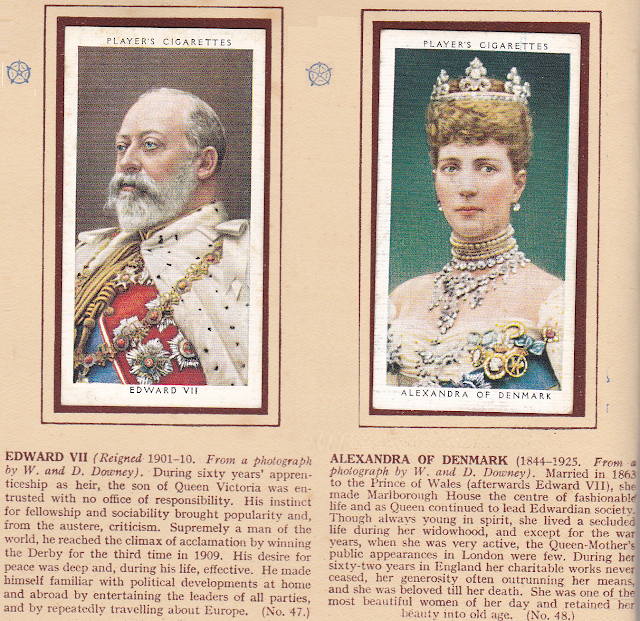 The House of Windsor - This is the current royal house of the United Kingdom and the other Commonwealth realms. The dynasty is of German paternal descent and was originally a branch of the House of Saxe-Coburg and Gotha, itself derived from the House of Wettin, and it succeeded the House of Hanover as monarchs in the British Empire following the death of Queen Victoria, wife of Albert, Prince Consort. The houses of Saxe-Coburg and Gotha and Windsor have provided five British monarchs to date, including four kings and the present queen, Elizabeth II.  The name was changed from Saxe-Coburg and Gotha to the English Windsor in 1917 because of anti-German sentiment in the British Empire during World War I. During the reign of the Windsors, major changes took place in British society. The British Empire participated in the First and Second World Wars, ending up on the winning side both times, but subsequently lost its status as a superpower during decolonisation. Much of Ireland broke with the United Kingdom and the remnants of the Empire became the Commonwealth of Nations.  The current head of the house is monarch of sixteen sovereign states. These are the United Kingdom (where they are based), Canada, Australia, New Zealand, Jamaica, Barbados, the Bahamas, Grenada, Papua New Guinea, Solomon Islands, Tuvalu, Saint Lucia, Saint Vincent and the Grenadines, Belize, Antigua and Barbuda, and Saint Kitts and Nevis. As well as these separate monarchies, there are also three Crown dependencies, fourteen British Overseas Territories and two associated states of New Zealand. 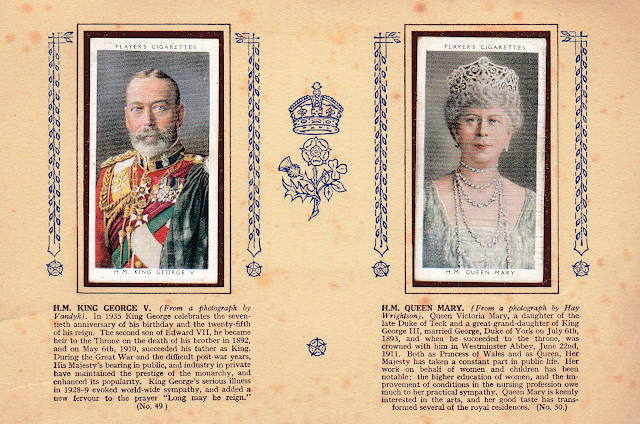 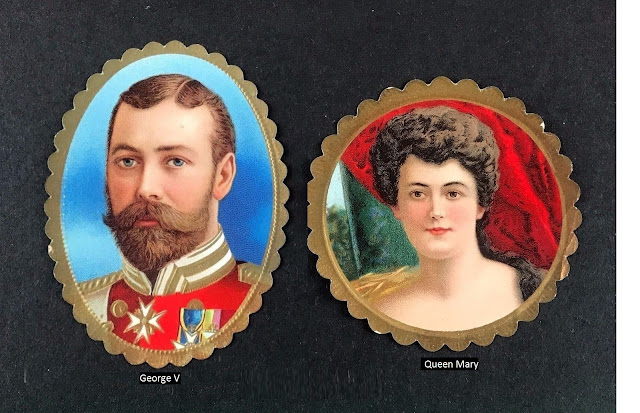 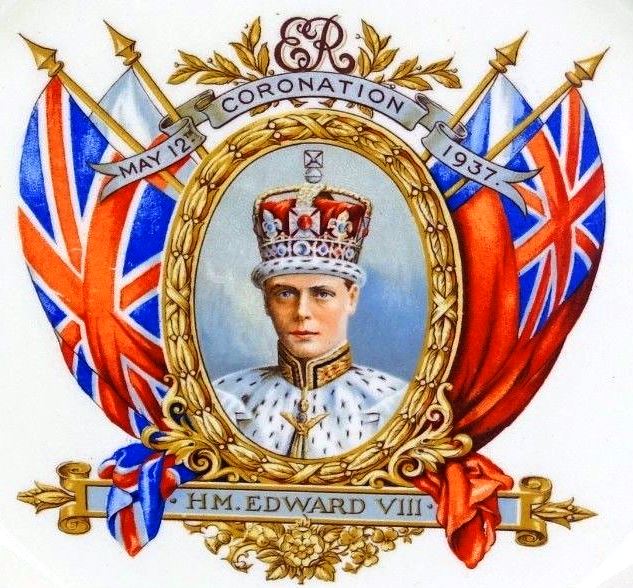 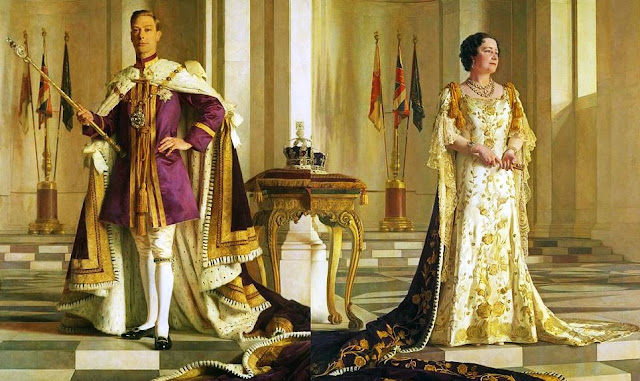 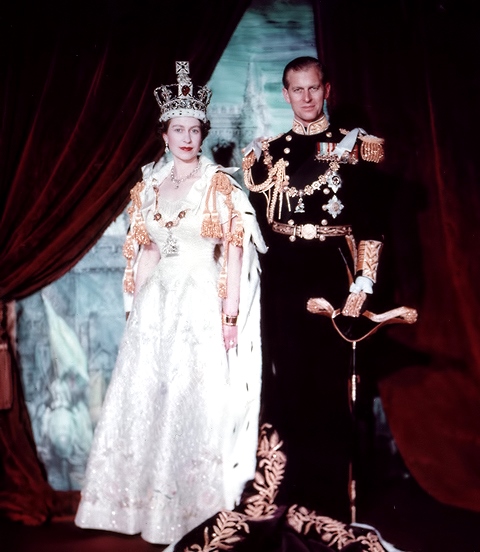